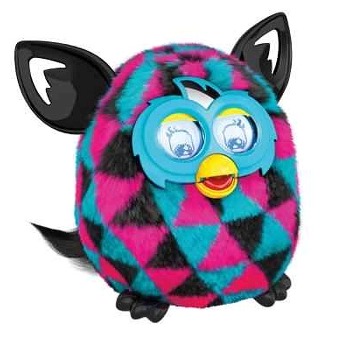 Pretty much anyone who has lived in the 2000s is familiar with Furby; a small, egg shaped somewhat quirky robotic toy from Tiger Electronics (Parent Company, Hasbro) that became a huge fad at the turn of the century. Furbies were popular with kids as one of the first real robotic toys, and served as a “surrogate pet”  for kids who didn’t have a dog or cat. Sadly, their loud noises and “bubbly” Furby personalities won them a reputation among parents as an irritating toy to be avoided, and the Furby fad died out.

However, while most remember Furbies in their first incarnation, they have actually undergone a couple of updates over the years, having resurfaced twice now prior to 2013, which brings us the third incarnation of these little guys: The Furby Boom.

Furby Boom is the newest and most advanced form of the Furby ever made. Thankfully, this incarnation retains none of the annoyance of the first generation, and has many more personalities to boot. The Boom is far more “animal” like than previous incarnations of the Furby, with mechanical motions in the shape itself, allowing it to do things like bob its upper head, look up and down, and “rest” upon itself to sleep. On top of that, the eyes have had an overhaul since previous versions. While the 2012 incarnation introduced digital eyes into the model, the Furby Boom 2014 variant eyes are far more animated than its predecessor’s. The Boom can be interacted with via simple motions, like petting it, tickling its tummy, and pulling on its tail. It also uses voice recognition to interact with kids when asked questions or just talked to. Admittedly, the conversation will feel a bit one-sided.

The big feature upgrade that the Furby Boom 2014 brings to the table, however, is the development of the free Furby Boom app for android and iPhone smart devices.  The Furby Boom App is free on its own, but offers in-app purchases allowing for more enjoyment. The trick is that if you own a Furby Boom, you can use the Boom app to its full capacity without any additional purchases, and interact with your physical Ferby Boom at the same time. The app allows the user to play a variety of different games and interact with the Furby on an entirely different level, with the big draw being a sort of Tamagotchi-style hatching of baby Furbies, known as Furblings. These small variants of the Furby Boom known as Furby Furblings, offer the functionality of the larger Furbies, with a little sprinkle of extra cuteness on top. Furby Booms can also interact with one another, along with Furbies from the older 2012 incarnation. However, the 2012 Furbies cannot utilize the BOOM! app, so be warned.

There are too many Furby Boom versions to list, but buyers should be aware of two things. First of all, the 2012 and 2013 Furby are still on sale and available, so if your intent is to purchase a 2014 Furby Boom, be sure you are buying the right thing. Booms are recognizable by a few features, most notably having a small hollow notch at the ends of the ears and having plastic feet as opposed to the fabric-material on the older ones. I have also noticed that new Furby Booms tend to have a bit more intricacy to their fur, with lots of color and some patterns. Older Furbies also occassionally sported patterns, but mostly were solid colors, while new Furbies appear to be focused on patterns.

You probably won’t have much trouble telling apart Furby Booms and Furby Furblings, though.

Kids who like animal robots that interact with smartphone apps. (What, that’s not a valid category of children in this day and age?)

Nostalgia item for parents who grew up with the original Furby.

I have to grudgingly admit that the Furby Boom really is pretty cute. I personally remember Furbies far less fondly than the Boom really deserves. This one has a very goofy, high pitched voice that sounds like a sort of small, silly alien, and its reactions and interactions are quite enjoyable. The Boom really does take a huge step towards the whole concept of a robot pet; far more so than the toys I grew up with.

The Furby Boom has many personalities, and you can change them according to how you “treat” your Furby. If you are gentle and kind, tickling your Furby to make it laugh, and giving it lots of hugs, it will have a sweet personality.  If you want your Furby Boom to have the “hyper” personality, you can put it in a room with loud TV in the background (think cop shows with car chases), talk to it a lot, and tickle it. If you prefer a mean personality, your Furby Boom will not like having its ears pulled, or being tilted up and down.

The Boom app also adds a really nice extra level of enjoyment to an already solid toy. All and all, there’s a lot to enjoy here, and it can also be a stepping stone for kids who aren’t quite ready for pets yet.

6 and up. Though the Furby itself doesn’t have many small parts, it does involve batteries (4 AA) and requires a Phillips Head screwdriver to install (the screw itself is very small) so you probably won’t want small children doing it themselves.

There have been reports of problems with the Furby Boom App not working on iPad, as well as some complaints about the Furby Boom egg not hatching. The Furby Boom App is only compatible with Furby Booms, and will NOT interact with older versions of the Furby. While this really can’t be counted as a mark against the toy itself, the fact that it can be confusing and disappointing to the unsuspecting consumer makes it warrant a mention. It also some compatibility problems with older versions of smart devices, so be sure to read up on how it may work with your device before deciding if it’s a buy or not.

The Boom is also very battery dependent requiring 4 AAs at a time, though the life of said batteries will vary entirely based on individual use.

The price of the Furby Boom fluctuates greatly based on pattern and design. It seems like the standard price is around $40, but it can go significantly higher or lower, with the highest one I found being $65.25 for the Furby Boom Triangles variant in pink, black and blue. Furby Furblings tend to fall into the same kind of situation, though they tend to be priced at around $20 due to their smaller size.

I found no information regarding a guarantee for the Boom.

Absolutely. They are quite reasonably priced (mostly) and are very good for what they offer.

Odds are, you can purchase these guys from pretty much anywhere that sells roys. They’re quite popular right now. You can also pick them up directly from Hasbro’s online store, or from retailers like Amazon.

I went into this review expecting to be unimpressed, but I have to admit I was wrong in that assessment, blinded by an old-school feeling towards a very old toy that I didn’t particularly care for as a child. If you are a young parent who hated the original Furby, don’t let that stop you from giving this little guy a chance. The Furby Boom is a very cool toy, and it stands out on its own very well.