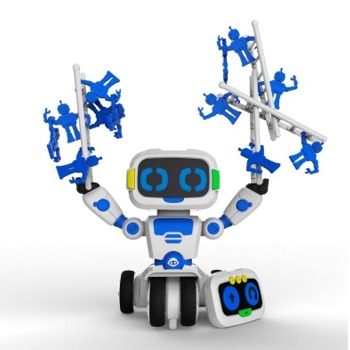 Tipster is the first robot produced by WowWee that is targeting the pre-K crowd. Stated to be for ages 4 and up, Tipster can It has the ability to tip, move around, spin and balance using some of the included Tipster ladders and character pieces.

Robot toy collectors will likely want to include the Tipster in their collections. Parents are now realizing that toy robots can play a part in a child’s development and growth, which will make the Tipster robot an attractive Christmas gift idea for parents of preschoolers, as well as children of elementary age.

Robots have been all about fighting for many years, and many parents have been reluctant to buy a “violent” toy for a young child. But public perception of toy robots is changing because of the introduction of educational robots. WowWee started the non-violent robot trend by developing robots such as Robo-Me and the MiP line of balancing robots.

Tipster is also a balancing robot, but it was designed to attract a younger audience.  Tipster character pieces and ladders help kids experiment with weights and balances, which in turn help develop the child’s motor shills. Brightly colored and with a winsome expression, Tipster is ready to balance, tip and spin his way into your child’s heart.

Unfortunately, information about the Tipster robot is limited, making it hard to say what, if anything we don’t like about it.  Tipster is available in some stores, but there are few customer reviews, and even fewer products actually available for review.

Tipster is currently available in a few online stores for around $50.

We have been unable to determine whether Tipster will come with a guarantee. We will know more once it is released to enough stores to get our hands on an actual product.

We have no idea whether this toy is worth the money. However, if we are to base it on previous WowWee products, we are prepared give it a conditional yes.

Tipster has been spotted at Target and WalMart, and through third party sellers on Amazon.com.  As the prime toy shopping season draws near, we expect there to be increased availability and more information. We will be updating this review accordingly.

What little information we have on the Tipster is quite enough to make us anticipate and look forward to learning more about it and eventually owning it once it comes out!