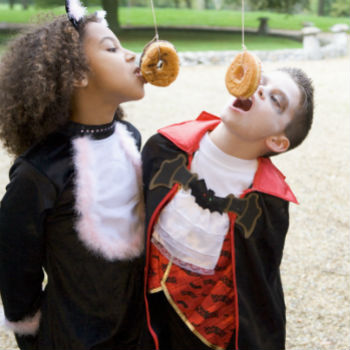 Everyone loves to dress up for Halloween, but safety concerns in recent years have changed the way Halloween is celebrated. More and more families are choosing to have a Halloween party at home to celebrate. But which Halloween party games will your children want to play?

Halloween Charades is a great game that can be played with as few as two teams of two children each. One child tries to get the others to guess a word or phrase. They are allowed to use gestures or oral clues as long as they do not include the target word or phrase. This game can also be played in larger groups, where each player guesses in turn. When their turn comes, they pull a piece of paper out of a basket or other container that has the name of a Halloween character, or some other Halloween topic written on it. A more challenging version is timed, in which each player has one minute to successfully get the group to guess the Halloween topic you selected.

Pass the Orange or Apple

Pass the Orange or Apple is a Halloween party game that is fun for a group. Party participants divide into teams of 4, 5 or 6 or more depending on the size of the party. Each team should stand in a line, one behind the other. The first person is given an orange or apple which they place under their chin. Everyone should have their hands clasped behind their backs. Without using their hands, they turn around and try to pass the orange or apple to the person behind them. Remember, no hands! The winning team is the first team to successfully pass the object to the last person in line without dropping it.

Halloween Treat Hunt is perfect for little ones. This is a variation on the timeless Easter egg hunt. Plastic eggs work best, but you can also use little plastic pumpkins. Paint the eggs with Halloween faces and fill them with some candy or other treats. Insert a big special prize in one or two of the eggs. This game is best played in a yard, but can be played in a house.

Halloween Treasure Hunt works best as an outside game for older children and adults. Create clues and a treasure map. You can have as few as 5 clues or as many as you like. Place them around the yard or an area where the game will be played. If you have a larger party, divide the participants into groups of two or three per team. Hand each team Clue number one which will lead them to Clue number two and then on to Clue number 3 and so forth. The last clue will lead them to a Treasure Map. The treasure is shown on the map drawing with X marking the spot. Hide the treasure chest somewhere inside or outside the house. The Treasure chest can be a Halloween theme container, like a large plastic pumpkin filled with toys, candy or whatever prize you can think of. Celebrating Halloween should be a fun, safe holiday the whole family can enjoy.

This is a landlubber’s version of the traditional Halloween party game, “Bobbing for Apples”  that has been played for many years. It is best if this is done outdoors. You can hang the donuts from a tree limb, or the crossbar of a swing set, or just about any overhanging surface the participants can stand under with open mouths! Donuts are good because they are soft and children are more likely to be able to actually grab one with their teeth. Set a time limit, and the first person to eat the donut wins!

The variations on these games are limited only by your imagination. With a little planning, you can have an amazing Halloween party!