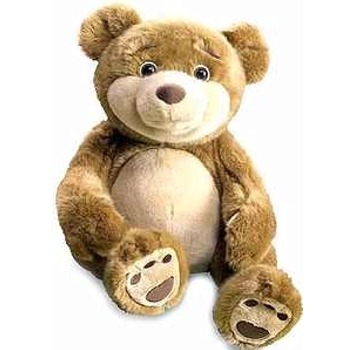 Most people can probably think back to their childhood and remember a toy; a stuffed animal, action figure, or doll,that they used to talk to and carry around as a kind of surrogate best friend. In the same vein as the imaginary friend, Teddy Bears and other stuffed animals hold a special place in our hearts, and add a bit of companionship to young children that helps them through their earliest years. However, in the past, it was a bit…problematic, if your child were to suddenly tell you that their bear had started talking.  Not anymore!

Meet WikiBear, a smart teddy bear that connects to the internet via a bluetooth connection to your favorite smart device via a free app. Talk to WikiBear, WikiBear responds. Ask WikiBear a question, WikiBear searches the app’s internal database for a response, and if it fails to find one, proceeds to search the internet (Namely Wikipedia, hence the name, but it can find other things as well) for an appropriate answer.  It can also crack jokes, give you practical information like the weather forecast, and remember some forms of information you give it to form a “relationship” with you. In a way, WikiBear can really be called a “Siri for Children,” but with some more personality, a bit cuddlier, and a distinctly larger appetite for honey.

Kids of any age or gender who would enjoy a teddy bear.

Parents who want their kids to grow up with intelligent toys.

WikiBear is a very silly, somewhat surreal toy – in a good way! While its appearance is no different from a traditional teddy, for it to suddenly respond in its robotic voice is a stark contrast to what one would expect. To some, this is actually a turn off, with the robotic voice hindering the “cuddly-factor”, but personally, I found it great.

It’s also cool that you can use Wikibear to quickly come across relevant news, because of its ability to scour the internet to respond to your question. All you really need is access to a smart device.

And that’s the downside. WikiBear requires a smart device. This can be a real disappointment to anyone who does not have access to one. Furthermore, not only does it need a smart device, but it needs a smart device connected to the internet. In other words, if you have a tablet that does not have access to wi-fi,  you will be unable to make use of WikiBear’s primary functionality. You can use WikiBear with your Smart Phone if you don’t mind the fact that it will be drawing from your monthly data allotment. This is worth making a note of if you do not own a plan with a high data usage limit. We will not know until WikiBear is available just how much data it could accidentally use, resulting in additional usage charges.

There have been a series of appearances by WikiBear on Conan O’Brien’s late night talk show. An actor voices the WikiBear and causes it to say some pretty outrageous and inappropriate things. While you don’t have to worry about a real WikiBear actually engaging in this kind of adult humor, it is worth noting that Wikipedia is its primary data source, and contains articles about many topics that are not appropriate for children. When the toy is released we will know more about what kind of filters WikiBear will use to prevent the child from accessing inappropriate information.

WikiBear is expected to be launched some time in September. At the moment, the price ETA is around $60

No information is available on this at the moment.

It really can’t be said until the toy is released and can be properly reviewed. That said, the concept is intriguing, and the pre-release buzz has been positive for the most part. WikiBear is eagerly anticipated, and seems like it will be a very good investment when it is finally released.