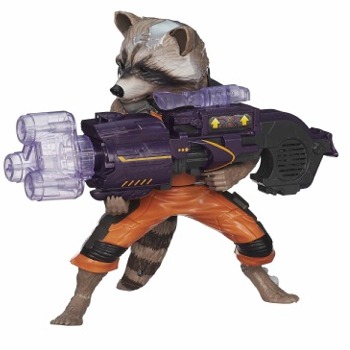 Marvel’s  Big Blastin Rocket Raccoon is a 10″ talking action figure based on the Rocket Raccoon character from the hit movie, Guardians of the Galaxy. With integrated sound effects, lights, and other electronic functions, this digital toy belongs in every toy and action figure collector’s collection.

Hasbro, producers of the toy, should be congratulated for making certain that the Big Blastin’ Rocket Raccoon digital toy lives up to the character in the movie, and not just with regard to the look, the weapon, or the things it does. They also incorporated the character’s personality into the toy, complete with snarky remarks and comments. The use of  Bradley Cooper’s actual voice gives this Rocket added authenticity. Of course, the built-in sound effects during battles will be a favorite for children and collectors alike.

Big Blastin Rocket Raccoon is holding its spinning blaster. The weapon should mimic the action that the actual blaster makes in the film. It lights up and rotates, similar to to the way it does when Rocket Raccoon starts blasting. Aside from that, however, the action becomes much more convincing because of a recoil effect with every blast. The raccoon actually shakes and trembles!

In order to make Big Blastin Rocket Raccoon blast its tool, all it takes is one press of a button on its leg. This eliminates the need for remote controllers.

Unfortunately, the toy shipped before Bradley Cooper signed on. So while remarkably similar, the voice of the character is not, in fact, the voice of Bradley Cooper. We hope that any future version of Big Blastin Rocket Raccoon can be updated to include the authentic voice. If authentic voices are important to you, check the packaging first. Other action figures in the Guardian of the Galaxy line are marked “Movie Voice.”

WARNING: Adult assembly required. Keep small parts necessary for assembly out of children’s reach.  NOT appropriate for kids under 3, as small parts present a choking hazard.

The Guardians of the Galaxy Big Blastin Rocket Raccoon electronic action figure has a selling price of $29.99.

Hasbro has not yet made any announcements regarding the warranty or guarantees covering this product.

It’s Rocket Raccoon from the Guardians of the Galaxy. It talks, it moves, it fights, it blasts. Of course, it is worth the money! Better yet, complete the whole collection by purchasing the other action figures from the movie, as well.

There are three AA batteries preloaded in the Rocket Raccoon to enable customers to use the “Try Me!” features while the toy is still in the store. Hasbro recommends that you replace these batteries before you use the toy for the first time.

The Guardians of the Galaxy Big Blastin Rocket Raccoon is sure to become a sought after toy this Christmas. Get yours before they disappear!

Marvel products are produced by Hasbro under license from Marvel Characters B.V.