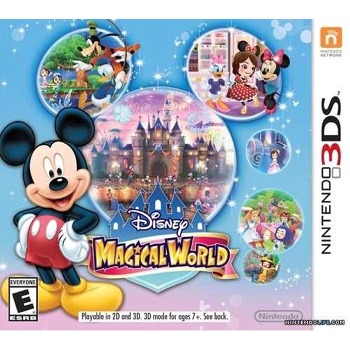 Disney Magical World is a Nintendo 3DS game that gives players a lot of control over how their favorite Disney characters can thrive and survive
in various Disney-themed worlds. It’s fun, it’s colorful, it’s challenging, and it’s definitely magical!

Parents always look to Disney to provide wholesome entertainment for kids, and the Disney Magical World Nintendo 3DS game is the perfect way to integrate Disney fun into playtime! Disney fans will also want to enjoy their favorite Disney characters and worlds through this game.

Who doesn’t love Disney? There is something for everyone, from princes and princesses, witches and fairy godmothers, talking ducks and perky chipmunks, and even a pirate that shares the name of a certain bird.

The wide variety of Disney characters and the equally wide selection of Disney-themed worlds found in this Nintendo 3DS game prove to be its main draw. You won’t be bored, with so many options to choose from.

Being able to customize your own Disney world is probably every child’s dream. Imagine being able to change the clothes of your favorite princess, or dressing up Cinderella, or making characters such as Mickey Mouse and Pluto do something mundane such as planting crops. It’s sure to be quite an adventure!

Of course, there are also other tasks and quests that must be performed or be undertaken, and it can take players across worlds. Battle ghosts, hunt, collect items…with so many things going on, there will never be a dull moment.

The addition of a café that must be managed is a good touch, adding more challenges to the game. This is also a good way to introduce kids to business dynamics, since they will be tasked to manage the café, from creating the menu items to organizing the staff and putting them to work.

The slow pace of this game is a great way to relieve stress. It is exciting and stimulating, yes, but it is also quite relaxing.

One of the things we like about the Disney Magical World is also, to a certain extent, the one thing we don’t like about it. Some players may find it to have a pace that is too slow.

The Disney Magical World, also known as “Disney Magic Castle: My Happy Life”, has a price of $29.99.

No information on warranty for Disney Magical World is available at this time.

For $29.99, you will be exposed to so many Disney worlds, and able to play with so many of your favorite Disney characters that it’s practically a steal!

Expect Disney Magical World to be available in all major toy and gaming retailers, as well as online stores such as Amazon.