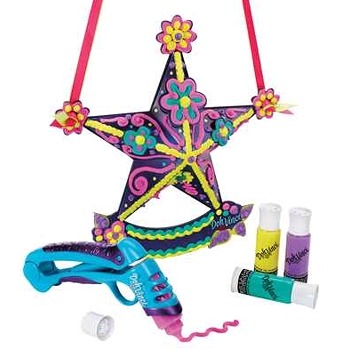 I’m pretty sure every single person ever, since the dawn of the universe, has grown up with Play-Doh. Play-Doh is like, embedded into the heart of the human spirit, and subsequently, has been there so long it has long since dried out and can no longer be shaped to fix that one little mistake you made around the edges.

Admit it. The moment you read “Play-Doh” you immediately flashed back to some masterpiece you made with it once upon a childhood. For me personally, it would have to be making horribly inaccurate miniature Pokemon. I’m certain the overwhelming majority of the planet has been far more creative with it than me.

Well, being such an integral part of the human form, Play-Doh is still around, and new sets of it come out periodically. If you watch commercials (and subsequently, TV channels that would advertise things like Play-Doh) you’ve probably seen some for various “fake food” Play-Doh sets, like Play-Doh McFlurry. However, Hasbro does still periodically attempt to “mix it up” a bit. DohVinci would be one of those attempts.

DohVinci is a new kind of Play-Doh, designed to be extra-soft and thus, lends itself more towards patterning and the like. You load it into a press-gun, and then gradually squeeze the handle to push the Doh out onto a surface in a thin line, kind of like icing a cake. While there are good couple of DohVinci products available, we’re going to focus on one in particular for this article. The idea behind this DohVinci kit is to create a door-hanger, using a cardboard pseudo-3D star. The star has a number of coloured instructional lines on it, showing where to lay the Doh. Once it’s adequately designed, let it dry, and use the included piece of ribbon to hang it from a door. Clean, easy, fun.

The design of the star, coupled with the particularly bright colours and the way they mesh suggest that this set is aimed at the young girl demographic. That said, if you’ve got a boy who is particularly interested in arts-and-crafts, I wouldn’t say there’s any reason they wouldn’t enjoy it as well.

6 – 12 years old. Play-doh of any kind has always carried with it a risk for small children; specifically, it’s dangerously edible, and a severe choking hazard. DohVinci is softer, but still just as dangerous in this regard. As such, it’s not recommended to be given to children at an age where they still like to try eating their toys.

It’s a nice departure from the norm. It’s an interesting idea, if not a tad flawed in execution, and will definitely be entertaining for little or big arts-and-crafts nuts.

To put it bluntly, it doesn’t work entirely as advertised. The Dohvinci itself comes in a rather limited quantity, and while using the more prominent colours on the piece, you may find that you’ve used so much that you actually cannot get the push-gun to get any out of the tube any longer, forcing you to continue by hand. On top of that, depending on how conservative you are with your Doh, you may actually run out of a particular color before the project is finished, forcing you to either use a different colour and completely throw off the design, or purchase more Doh. On this front, Dohvinci as a whole is significantly inexpensive, but it still would have been nice if they included just a bit more.

The other problem is that it does not dry over night unless you’re in a particularly hot climate or time of the year. Some consumers have actually reported it took multiple days for it to finally dry. Remember, normal Play-Doh you either don’t dry at all, or dry in the oven. Thanks to the inclusion of the cardboard star as a factor, you can’t dry this in the oven, which causes the process to take quite longer. Make sure your child is aware that they may not get to hang up their creation for at least a day or more.

The DohVinci Door Decor Kit comes with 4 tubes of Dohvinci Play-Doh in 4 colours; Pink, Purple, Yellow and Teal. It also includes a cardboard star, a press-gun, and a pink ribbon for hanging the star. The price of this set is about $11.99. Additional Dohvinci tube sets are priced at $12.95, and include a full refill of all 12 colours that the Doh comes in. A “Deluxe Styler” Push-Gun can also be purchased, which includes some design-tips for the gun itself along with 3 tubes of the Doh in , for a base price of around $9.99.

Hasbro does not appear to be offering any sort of guarantees in regards to Dohvinci. At the very least, I could not find any.

For what you get, it is a very inexpensive arts-and-crafts kit. If your kids are into something like this, it will provide some good fun, though not particularly long-lasting.

Pretty much anywhere that carrys Hasbro toys will have this. Online Retailers such as Amazon and Toys-R-Us are also a prime place, or if you want to buy direct, Hasbro’s own online store.

Cool idea, but with some unfortunate flaws. It does what it does rather well, but be prepared to run into issues such as the potentially extensive time-period the Doh may take to dry.