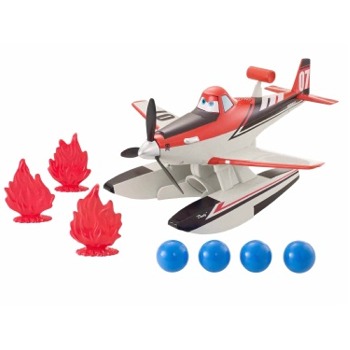 The Mattel Fire Blastin Dusty Crophopper is the toy recreation of the character from the Disney film PLANES: Fire & Rescue, which has the ability to shoot plastic water balls to put out the fire in the targets. It features six water balls, three fire targets, and more than 20 sound effects and phrases from the film, enabled by its Smart Sounds technology.

This will definitely be gobbled up by fans of the Planes movie and the Planes franchise as a whole, once it hits the shelves. Of course, toy collectors, especially those who like collecting toy planes, will also want to include the Fire Blastin Dusty Crophopper to their collections.

4-10 years. NOT appropriate for kids under 3, as small parts present a choking hazard.

Many times, the main gripe that we have with toys that are inspired by characters and figures from a movie is the likeness or, to be more precise, the lack of it. It is important that they look exactly like the ones in the film. Otherwise, what would be the point of getting one?

Fortunately, the Mattel Fire Blastin Dusty Crophopper toy airplane does not have that problem. Its likeness to the one in the movie is not going to come into question. And the fact that it also produces sounds and phrases from the movie adds to the realism.

And it’s not just the appearance and sound that looks authentic. Even the action is made to authentic and simulate the actual movement (and personality) of the Dusty that we see from the movie.

The realistic sounds and phrases are also remarkable, and this is clearly thanks to the Smart Sound technology that Mattel incorporated into the design.

We also like that this is a toy that offers a gameplay that’s not purely point and shoot. A little angling and strategizing is also required in order to hit the target at first shot. No doubt, it will enhance a child’s cognitive development and will teach them how to strategize and plan their shots.

Since Mattel is the manufacturer behind these Disney toys, quality is guaranteed.

Since the Fire Blastin Dusty Crophopper is still to be released this coming July 2014, it is still unknown whether it has features that make it fall short of a 5-star rating.

Mattel has not released any information regarding warranty coverage for this product.

The anticipated selling price of the Fire Blastin Dusty Crophopper is $49.99, although the price may vary. It is roughly the same price attached to similar toy planes that are inspired by characters from a Disney movie. It’s still difficult to conclude whether it is worth the money or not.

The Fire Blastin Dusty Crophopper will be available directly from Mattel and other major toy retailers. Online merchant sites are also guaranteed to hold it in stock. One such site is Amazon.

Whether you are a fan of the Disney movie or not, you are guaranteed to have lots of fun playing with the Fire Blastin Dusty Crophopper.