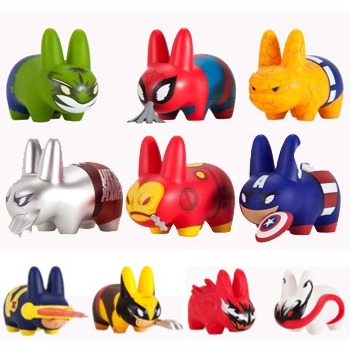 KidRobot’s Marvel Labbits now has a second series, which is composed of ten mini-Labbits and two large-scale Labbits ranging from superheroes to antiheroes. Each wields their own weapons of choice or distinct costumes and character quirks.

Marvel fans, especially those who are drawn towards characters from the DC universe will definitely be interested with the second series of Marvel Labbits vinyl figures. They don’t even have to be fans of the characters or the Marvel franchises, however. Those who have an appreciation for action figures and make a habit of collecting them will also be drawn to the Marvel Labbits by KidRobot.

The first series of Marvel Labbits was a huge hit for many reasons, primarily the characters themselves, the bold and vibrant colors, and the representation of the characters reinterpreted in the Labbits way.

We already loved the characters in the first set, and we are even happier now with the second wave, since it includes DC characters. From X-Men, there are Cyclops and Wolverine. From the Avengers, there is Iron Man, The Hulk, and Captain America. The Fantastic Four franchise is represented by The Thing and Silver Surfer. Other characters include Spiderman, Venom, and Anti-Venom.

And those are just the mini-Labbits, which are 2.5 inches tall. There are two 7-inch Labbits, and they are the characters of the Ghostrider and Deadpool.

The designs of the Marvel Labbits are quirky but still remain faithful to the original characters. Spidey’s web, Cap’s shield, Wolverine’s claws, The Hulk’s green skin and the  Silver Surfers, well, silver color.

The design of Ghost Rider is also quite impressive. It has a body designed like that of a skeleton, and its flaming head is intricately designed to give the illusion of flames.

We understand that the small size of the Marvel Labbits, as well as their general Labbit “posture” can cause some limitations when it comes to the design. While the designs of the characters are quirky, we feel that some are a bit awkward. Spidey’s web is being spat from his mouth, and Wolverine’s claws are coming out of his mouth as well. These small details could have been better thought out.

KidRobot has not yet released any warranty information for this series.

Some may feel that $9.99 for each mini, and $49.99 for each large-scale Labbit, is quite steep. However, you will be paying for quality in these collectibles, so those amounts are reasonable enough.

This series of Marvel Labbits products are available in all KidRobot stores and other online retailers, including Amazon.

Collect all the Labbits – the minis and the full-size ones – in this second series of Marvel vinyl figures and complete your Labbits collection by adding these DC characters! Trust me, you won’t be sorry you did!