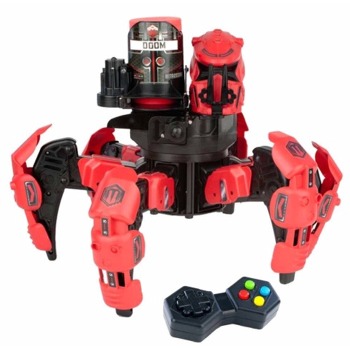 The Nerf Combat Creatures Attacknid Robots are the result of a collaboration between Hasbro and Wow! Stuff. While most consumers are probably familiar with Hasbro, Wow! Stuff is a bit more obscure. They have a few different toy lines, but specialize in remote control toys, with a particular love of flying.

The ingeniously named Attacknid Robots come in four variations; one blue, one black and two red,  with one of the latter having more of a crimson shade. This is important, because the color of the Attacknid also determines which of the two weapon variations you will receive; one of which is a more traditional dart-shooter, and the other is the disk-based launcher shown in the picture displayed here. The range of the weapons varies, but on average, they are said to shoot their projectiles 30 feet.

In regards to mobility, as you probably gathered from the picture, these are six-legged walker bots that are designed to traverse different kinds of terrain with ease. They do not move very fast, but since the primary mode of play is them fighting and shooting at one another, the slower movement is suitable. Consider them akin to small, walking tanks. Slow, but packing a punch.

Nerf Combat Creatures Attacknid Robots are also controlled by a simple wireless controller, which can control the robot from up to 20 feet away. The exception to this is the black variation, titled the “Stealth Stryder”, which has a Bluetooth link in its head rather than a controller and is controlled via a smart device app available for both iOS and Android. We’ve heard that the Android app is unavailable for some kinds of Android devices. We can’t say if this is still a factor or not, but if you own an Android device,  make sure prior to purchase that you can download the free “Combat Creatures App-Attacknid” App on your device. We can attest that the iOS version of the App has not been updated since November of 2013. Take from that what you will.

Here are the four selections of Nerf Attacknid Robots:

4 and up. Nerf Combat Creatures Attacknid Robots have a surprising number of small parts, and require a bit of assembly. It would not be the best idea to buy them for extremely young children as small parts may pose a choking hazard.

Attacknid Robots are robots that shoot Nerf projectiles. That’s automatically enough to warrant a spot on the “wall of awesome.” The concept is very cool, and has been executed quite well. If you or your kids like fighting robots, or just fighting toys in general, this will scratch the itch very efficiently. They also sound very “mechanical” as they walk, adding to the whole robot tank effect very nicely, though that may be a bit of a turn-off to some parents who would rather not buy toys that produce a good amount of sound.

As stated before, these robots can shoot a decent range. In addition, their blasters can be aimed to shoot upward to arch the shot. On top of that, their motion is very crisp and fluid. They don’t feel like they’re being hindered by simple motion. It’s fun to shoot them, and it’s fun to just pilot them around.

The design is quite cool; the armored look suits the “walking battle tanks” motif very well. Even better, it’s not all for show. Any direct hits to the armor pieces will result in those pieces popping off, showing a sense of “damage” as the fight lingers on. On top of that, three hits to the “head” of the robot will cause it to cease functioning, effectively allowing fights to come to an end once only one remains standing. The shooters on the things can also shoot in rapid succession, meaning a fight can be over in as little as a few seconds if aimed properly. It really boils down to your child’s individual motor skills.

As cool as they are, there are a few little things to keep in mind before if you purchase the Nerf Attacknid Robots.

First is that this is a toy where “some assembly required” applies, and continues to apply as they are played with.  They require 4 AA batteries which are not included, so keep that in mind going in. On top of that, as stated before, every time a direct hit against armor takes place, the armor pops off. This in turn means that the armor must be re-attached, which adds to the “small parts” aspect, that’s amplified by the fact that every variant of the Attacknid Robots comes with small darts or disks. We stress again, this is NOT a toy for extremely young children.

Another minor gripe about the Attacknid Robots is the notion of the Stealth Stryder coming with no controller. The Bluetooth linkup is a very cool idea, but it effectively renders the toy useless if you do not have a smartphone or tablet. This could become more of a problem because the app has received very minimal support, at least on iOS. It would have been nicer if they had provided a controller, if only to give people the option to use one. While it’s not a deal-breaker, it is something very important to note while considering a purchase.

Finally (and this is less an issue with the toy and more an issue with its marketing), there is a bit of potential for confusion when going online to purchase these guys. We came across some listings on Amazon where the descriptions seemed to give information that contradicted the pictures. For example, a listing for a Doom Razor indicates it comes with Darts instead of Disks, and a listing for a Vanguard Stryder states it will come with red armor. Check the listings carefully to make sure that you are getting the Attacknid Robots that you want to get.

The robots may have different prices for each variant. The consistent base price seems to be around $79.99, but you may find them for slightly more, or substantially less depending on where you shop (we found a listing for a Vanguard Stryder that was around $53).

There’s no way to dance around it, these things are a tad pricey. The minimum you are likely to pay, unless you find a flat out fantastic deal, is around $60 each. On top of that, while one can be fun on its own in a variety of ways, the true entertainment value in these guys is clearly for them to fight one another, meaning that you’ll probably want to pick up more than one. However, if you or someone you love is really into robotics, these robots are definitely worth your while.

You should be able to get them online at virtually any retailer that sells toys, such as Amazon. They can also be purchased directly from Hasbro’s own toy shop. While new variations may come out, this is not a brand new toy release, so if you want to buy one at a brick and mortar store, you should try a store that specializes in toys rather than an outlet that carries toys on the side. They are popular and should be readily available.

Nerf Attacknid Robots are a very cool concept with very few downsides. If you grew up in the 1990′s 0r 2000′s, you probably remember a little thing by the name of “Rumble Robots.” They followed a similar idea, though focusing on melee combat and more traditional wheels or belts for mobility, and ultimately did not live up to the hype in the long run. Attacknid Robots are an improvement on the idea, taking advantage of advancements in technology and the overall capabilities of toys nowadays to right what Rumble Robots did wrong.

Fun toy, fun robots, fun to watch and fun to control. A great gift for any fan of robots or robotics.