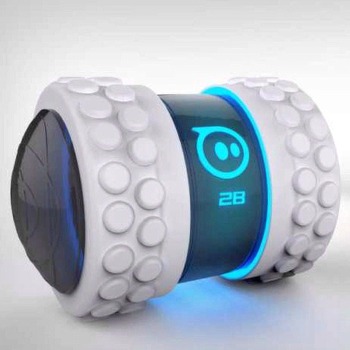 Sphero Ollie (aka 2B) is the much-improved and more exciting sequel to Orbotix’s Sphero robotic sphere that can be controlled using a smartphone. It is faster, edgier, more customizable, more interactive, and offers a lot more functionalities, which could only mean tons of fun for everyone who gets to play with it.

When the original Sphero came out, many were won over by the features of what is now known as one of the first devices that can be connected or tethered to a smartphone. Those who appreciate being able to do more with toys – robotic toys, especially – will definitely be thrilled with Sphero 2B since its applications and games will open more doors and opportunities for having a lot of fun.

The most noticeable feature of the Sphero Ollie 2B is its speed. Able to cover 7 feet in just one second, it is definitely twice as fast as the previous version, Sphero 2.0. Increased speed means greater versatility and flexibility. And just imagine the things you could do with that speed!

The addition of customizable wheels also made the Sphero 2B look more cutting edge and modern. Available in two colors (black and white, although more are coming), it now looks like something from the future (but it’s so much better that we can have it now!). The nubby tires also ensure traction and durability even when it is used on outdoor surfaces.

The Sphero Ollie 2B is also waterproof for a depth of several meters, which means it can even be used on water. Aside from communicating with smartphones and tablets through an Android or iOS app, it can also work with Bluetooth 4.0.

We absolutely enjoy using the multi-player mode, where we can get more than two Sphero 2Bs together and make them go at it in a duel. It’s definitely a sight to behold.

The customizable wheels add a bulky feel to the Sphero Ollie 2B, and the new shape results in a slightly longer turning radius. If you are not nitpicky, this may escape your notice, though.

Another thing we noticed is how the battery life remains the same, despite the increase in speed. It still lasts for about an hour. We would have liked for the battery life to get an upgrade also.

Slated for release this coming holiday season, the Sphero Ollie (formerly known as Sphero 2B) is expected to have a selling price of $99.00.

Orbotix has not released any details or information yet when it comes to the Sphero 2B’s warranty.

These days, getting a fully functional and impressive robotic toy for a hundred dollars or less is rare. Fortunately, Sphero Ollie 2B ticks all the marks, even the price.

You will  see the Sphero 2B gracing the shelves of your favorite toy and tech stores, including online merchant stores such as Amazon.

With Sphero Ollie 2B, not only will you get twice the speed, you will get more than twice the fun and excitement that only this robotic sphere can offer!