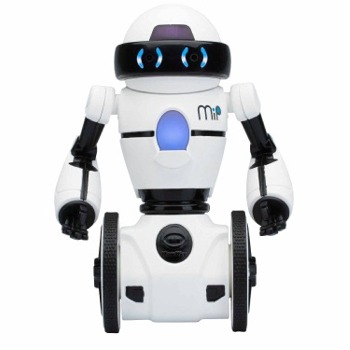 With advancements in technology, Toy Robots are becoming more and more robust with each passing year. When I was growing up, you would have been lucky if a robot could be controlled by a bulky controller with an equally inconvenient power cord connecting it. Nowadays however, we have MiP Robots.

Developed by WowWee, the company people from my generation would recognize as the masterminds behind the Robosapien line, MiP Robots are an interesting little robot line specializing in mobility and minigames with a twist - they balance themselves on two wheels.

This chipper little bot can be controlled in two ways: swapping between various “modes”  by turning its wheel to change the light on its chest, or a MiP Robots Smart Device App available on iOS and Android devices. It also comes with a tray that can attach to the black line across its chest, allowing it to carry things around or play balancing games.

A MiP Robot’s modes can allow it to do a variety of things including, but not limited to, reacting to obstacles, being controlled by hand motions and silly robot dancing. Controlling it with the MiP Robots App opens up a variety of additional options, including playing a couple of fun little games, controlling its mood, drawing a path for it to then replicate in motion, or taking direct control and steering it yourself. MiP Robots also come in several color variants, so be sure to look around for the one you want most before purchasing.

Kids and adults with an interest in robotics.

The design of MiP is very sleek and appealing; it looks like it would be right at home in a number of modern Sci-fi flicks. It’s quite durable, though you wouldn’t want to do anything like drive it off a table or down a flight of stairs. Multiple MiP Robots can fight each other in boxing matches or a “fight” mode, both accessible via the free Smart Device App, and its moods can make it do things like “fall asleep”; literally falling backwards to the ground. As such, barring some serious physical trauma, it’s unlikely you will need to worry about breaking your new MiP any time soon.

The balancing wheel design is what really makes this bot stand out. WowWee took full advantage of the gimmick they’ve designed and it shows. There are tons of things to do with your MiP Robots, even more so if you utilize its free app, meaning that it is unlikely you or your child will be growing bored of this one any time soon. From dancing, to stacking, to commanding and directing, the MiP has a variety of things to do to keep the fun “rolling.” (I’m so sorry.)

There really isn’t much to not like. The bot can get a little crazy in the movement department, and when steering it manually via the app, you’ll notice it can actually move surprisingly fast, which can make accidents possible without the proper care. Other than that, it’s a very solid robot.

The base price for MiP is $99.99, with it going up to around $119.99 + shipping if purchased in the UK. However, I have noticed that prices can be a bit sporadic at some online stores, so if you’re looking to get a MiP for as cheap as possible, be sure to check your options before purchasing.

Definitely so. $99.99 for a Robot Toy is already pretty cheap, much less one that can do as much as MiP can.

Pretty much anywhere that carries toys; physical or online, should have MiPs. They can also be purchased from WowWee directly.

Fun, solid Robot Toy for a good price. If you or someone you love is a fan of robots, MiP will be a great addition to the collection.