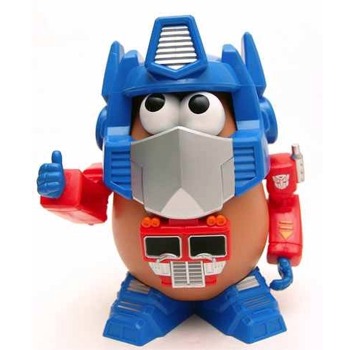 Mr. Potato Head Optimash Prime is everyone’s favorite spud in full disguise as the fearless and fiercely loyal leader of the Autobots, leading the war against the Decepticons. Basically, this is Hasbro’s Optimus Prime version of its much-loved potato head character.

This toy is perfect for a lot of people, ranging from fans of Mr. Potato Head to fans of the Transformers franchise. Toy collectors will also find themselves scrambling to get this  toy. Needless to say, kids will have a lot of fun with this toy, too.

The manufacturer says this is for ages 2-6, but small parts present a choking hazard for children under 3.

It is hard not to like the adorable Mr. Potato Head, and it becomes doubly harder when he dresses up as one of the most well-loved robot leaders and character of the Transformers saga. Dressing up as Optimus Prime may be quite a challenge for this spud, but he makes it work, with cute and adorable results.

The interchangeability of the Optimash Prime character and potato parts is also a great touch. It allows for a lot of experimentation when changing the look of the spud. Just by switching things around, you can come up with so many wacky looks for it. The parts are made of PVC material that can be easily bent, so plugging them in won’t take a lot of effort, although may be a challenge for younger kids.

This is also a great collector’s item, despite being touted as a toy for children 2 years old and above. It’s so cute, we wouldn’t be surprised if it takes pride of place on a table or a shelf.

Most fans of Transformers are now grownups and parents, and only a few of the kids these days are familiar with the original Transformers lore. This version is a good way for these parents to give their kids a glimpse of their own childhood, and the fact that it merges with Mr. Potato Head is a grand idea.

We think 2 years is still much too young to be playing around with the Mr. Potato Head Optimash Prime. For starters, the parts are a bit on the small side, so there is a risk of choking. Plugging the parts to the potato body can be quite tricky at such a young age, so parents would still have to do it for their kids.

Hasbro has not made any announcements on what warranty terms apply to this product.

Think of it this way: you will not only be getting one, but two, iconic toys if you buy the Mr. Potato Head Optimash Prime. It’s Mr. Potato Head, and Transformers’ Optimus Prime, albeit reinvented for wackiness. It’s definitely worth your money.

This toy is available in major toy stores selling Hasbro merchandise, as well as online sites such as Amazon.

Be amazed by Mr. Potato Head’s clever disguise and join him in the battle against the Decepticons! You’ll be glad to have your own Mr. Potato Head Optimash Prime.