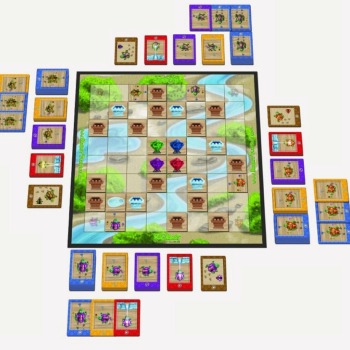 Robot Turtles is a fascinating little game, though you may not think that right from the get-go. It’s the brainchild of a man from Seattle by the name of Dan Shapiro, and came to fruition via a campaign on the mega-popular crowd-funding platform Kickstarter. Not only was its funding successful, but it shot well past the initial $25,000 goal, managing to raise over $600,000 total by the end and making it the most successful crowd-funding campaign for a board game on Kickstarter to date.

So what was it that made Robot Turtles so appealing to people? Well, for starters it’s more than just a board game.  The idea behind the game is that it very subtly teaches children the fundamental rules of software programming, but keeps them having fun while doing so. It molds the thinking patterns children will use to play the game into an understanding of things like the Order of Operations, along with encouraging experimental learning via the numerous ways a single game can be changed by the simplest change of strategy.

It’s a game with large amounts of potential complexity, melded down to the most basic starting line. As such, kids as young as 3 can play the game and have a blast, while still learning something exceptionally valuable in the process.

Parents who desire to have their children interested in programming, or to simply improve their logical thought process.

Target age group is 3-8, but it can be enjoyed by anyone with an interest in the subject.

With this day and age almost completely dominated by smart devices and video games, it’s quite cool to see a traditional board game come out and not only succeed in giving an entertaining experience, but doing so in an intelligent and engaging fashion. The game can be over extremely quickly; in as little as 5 minutes, or it can go on as long as you make it. The quality of the game pieces are all solid, with a good durable board and all the pieces you will need to play.

It’s also a very “pick up and play” sort of game. Only one player needs to know the whole of the rules, acting as  a “Turtle Mover” and controlling the pieces on the board, while the players focus entirely on how to play their cards. The game can also progress further as kids learn more and more how it works, with a number of extra rules and other ways to play that can be introduced to keep the game fresh and interesting.

It’s a very solid game that does what it does very well. As it goes on, Kids figure out that they are actually the ones “in control,” which they will absolutely adore. Parents, on the other hand, will love that their kids are both learning something fantastic, and having a great time doing it.

The ultimate limit on the game is about 5 players; 4 turtles, and 1 mover. This may be a bit disappointing in larger families or groups of friends. If that doesn’t put you off however, there isn’t much else to say.

The standard price for the game is $24.99 but I found some listings that bumped the price up a bit more.

Robot Turtles do not seem to have any sort of Guarantee.

Very much yes; both if you want a fun board game, and even more so if you wish to teach your children about programming. As a skill that is very much valuable in the modern world, you would pay considerably more to enroll them in a course teaching the bare basics of it, and they would likely find that far less enjoyable.

The game is sold primarily at Amazon.com (The official website of the product will direct you to Amazon) but can also be found at other places, like ThinkGeek and likely numerous other retailers. As stated before however, I have noticed that some listings appear to boost the price up a bit, so take care you do not accidentally spend more when you don’t have to.

Solid game, solid lesson. If you want your kids to start learning how to program; especially from a young age, this is one of the best ways to go about it.